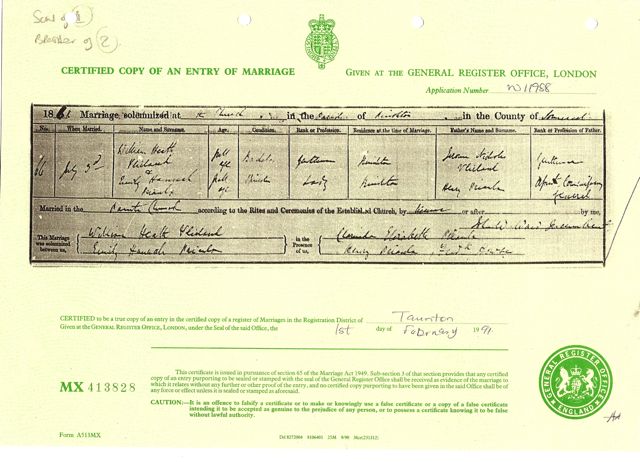 William and Emily had 4 children. All born at Hygeia house. 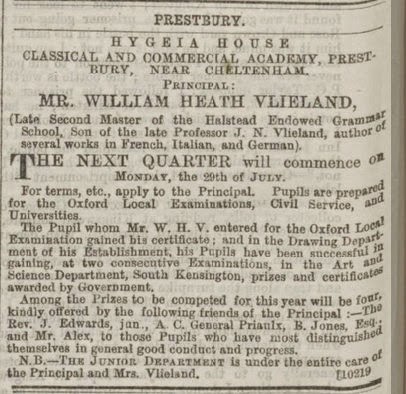 notice in the last sentence that the entire care of the junior department is in William and her hands . 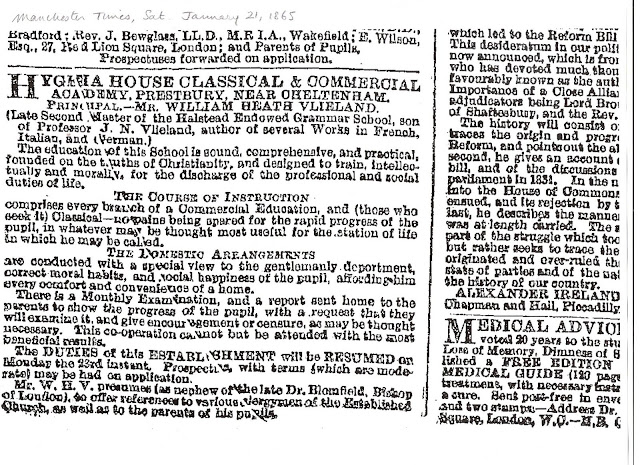 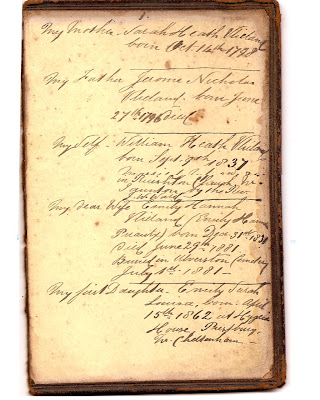 She was the daughter of Henry Priaulx and Amelia Hide they married 1828 St Peter Port Guernsey.

Where he later returned.
Henry Prialux became the Assistant Commissariat General based in Hobart. He was from Guernsey, Channel Islands, married to Amelia Hide and returned to England in February 8th, 1855 with 5 unmarried daughters. Amelia died in 1853 in Hobart as did his son Henry William George at Sandy Bay in 1858. He also worked in the Commissariat Department. One daughter remained in Tasmania, Maria Margaret Priaulx who married 1955 Eugene Bellairs, surveyor and explorer, and she died in New Zealand
He was Deputy Commissariat General of Tasmania.
PRIAULX Henry, assistant-commissary-general, Linden cottage, West hill
Therefore William was as a son in law, the executor of his father in laws will in 1872. 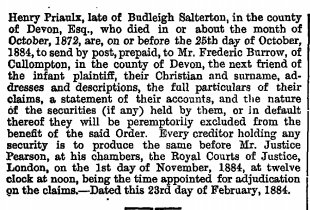 1042 THE LONDON GAZETTE, FEBRUARY 29, 1884.
PURSUANT to an Order of the Chancery Division of
JL the High Court of Justice, made in the matter of
the estate of Henry Priaulx, deceased, and: in an action
Harward against Vlieland, 1-878, P., 110, the creditors of
Henry Priaulx, late of Budleigh Salterton, in the county
of Devon, Esq., who died in or about the month of
October, 1872, are, on or before the 25th day of October,
1884, to send by post, prepaid, to Mr. Frederic Burrow, of
Cullompton, in the county of Devon, the next friend of
the infant plaintiff, their Christian and surname, addresses
and descriptions, the full particulars of their
claims, a statement of their accounts, and the nature
of the securities (if any) held by them, or in default
thereof they will be peremptorily excluded from the
benefit of the said Order. Every creditor holding any
security is to produce the same before Mr. Justice
Pearson, at his chambers, the Royal Courts of Justice,
London, on the 1st day of November, 1884, at twelve
clock at noon, being the time appointed for adjudication
on the claims.—Dated this 23rd day of February, 1884.

Before 1862 they had run a school for boys the Shuthonger House in Twyning.
It did not work out very well.
We can read about there bankrupcy in the newspaper.
In the London Gazette of 22 february 1878 we read
His Bankruptcy
Gazette Issue 24554 published on the 22 February 1878. Page 37 of 60
The Bankruptcy Act, 1869.
In the County Court of Gloucestershire, holden at
Cheltenham.
In the Matter of Proceedings for Liquidation by Arrangement
or Composition with Creditors, instituted by
William Heath Vlieland, of Southonger House, Twyning,
in tie county of Gloucester, Schoolmaster.
NOTICE is hereby given, that a First General Meeting
of the creditors of the above-named person bas been
summoned to be held at Messrs. Moores and Romney's
offices, in Tewhesbury, on the 12th day of March, 187a, at
eleven o'clock in the forenoon precisely.-Dated this 18th
day of February, 1878.
MOORES and ROMNEY, Tewkesbury, Solicitor
for the said Debtor.

Gazette Issue 24565 published on the 22 March 1878. Page 50 of 56
The Bankruptcy Act, 1869.
In the County Court of Gloucestershire, holden at
Cheltenham.
In the Matter of a Special Resolution for Liquidation of
the affairs of William Heath Vlieland, of Shutbonger
House, Twyning, in the county of Gloucester, Schoolmaster.
WILLIAM LOMAS HARRISON, of 37, Cannon-
street, Birmingham, Accountant, and William
Harrison Gray, of Tewkesbnry, Surveyor, have been
appointed Trustees of the property of the debtor. All persons
having in their possession any of the effects of the debtor
must deliver them to the trustees, and all debts due to the
debtor must be paid to the trustees. Creditors who have
not yet proved their debts must forward their proofs of
debts to the trustees.-Dated this 14th day of March, 1878.

Gazette Issue 24571 published on the 12 April 1878. Page 54 of 62
The Bankruptcy Act, 1869.
In the County Court of Gloucestershire, holden at
Cheltenham.
la the Matter of a Special Resolution for Liquidation by
Arrangement of tbe affairs of William Heath Vlieland,
of Shuthonger House, Twyning, in the county of Gloucester,
Schoolmaster.
I'HE creditors of tbe above-named William Heath
Vlieland who have not already proved their debts, are
required, on or before tbe 22nd day of April instant, to send
their names and addresses, with proof of their debts, to us,
the undersigned, vVilliam Lomas Harrison, of 37, Cannonstreet,
Birmingham, and William Harrison Gray, of
Tewkesbury aforesaid, or one of us, the Trustees under tbe
liquidation, or to Messrs. Moores and Romney, our Solicitors,
at their offices in Tewkesbury, or in default thereof
they will be excluded from tbe Dividend or Composition,
about to be declared.-Dated this 9th day of April, 1878.
WILLIAM LOMAS HARRISON, WILLIAM HARBISON GRAY, Trustees,
In an advert in the paper William claims he is the late second master of Halstead Endowed Grammar School.
And in 1862 their children were born at Hygeia House Classical and Commercial Academy in Prestbury near Cheltenham.
Hygeia house has it's own history.
Hygeia House is not only the school where William Heath Vlieland worked in 1865 but also the place where his children were born.
About the house. 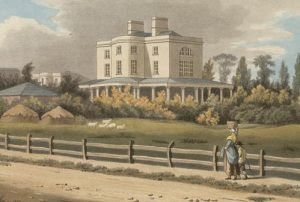 Henry Thompson – a Liverpool banker and an important developer of the very early 19th century, responsible for laying out most of Montpellier. His efforts started in 1801 when he bought 400 acres of land from the Revd Delabere. He built Hygeia House (called Vittoria House from 1813) in Vittoria Walk as a home for himself with a spa on site (the house still stands today), and a salts manufactory for extracting minerals from spa water, which survives as the Playhouse Theatre in Bath Road, built around 1806. The project grew rapidly and he laid out a great many beautiful walks and rides, including Montpellier Gardens, and built a lot of fine villas to go with it. In 1808 he opened a new spa near the top end of Montpellier to replace the one in his house, initially a wooden chalet, but replaced with a stone building in 1817, now known as the Rotunda (the dome is a slightly later addition). He also built Montpellier Gardens with an avenue of trees towards the town centre. After his death his son Pearson took over the development of the estate. 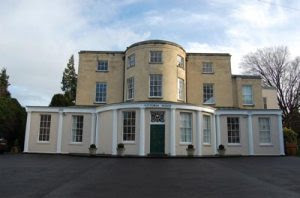 Pearson Thompson – son of Henry, born around 1796 and only about 25 when he inherited his father’s estate, which he continued to develop with great enthusiasm and generous budgets. He commissioned the famous architect J B Papworth for several projects, firstly to add the dome of the Rotunda at Montpellier Spa and then for the design and layout of the Lansdown area. Pearson Thompson’s estate was the first development in Cheltenham to have a purpose built sewerage system, although his properties also had a reputation for being “damp and unwholesome”. Although the Montpellier enterprise was hugely successful in the boom years of the early 19th century when spas were in their heyday, it didn’t survive the 1825 credit crunch, and he was forced to scale back and eventually sell off his developments to the Jearrad brothers in 1830. At that time he had just begun work on Lansdown Crescent, designed by Papworth, and had only built one house. The Jearrads completed it in a simpler and cheaper style, although it’s still a pretty impressive crescent.

Pearson Thompson was a Barrister of Law as well as a property developer. The grandiose Hatherley Court was most likely built for him in 1833 but he was only able to live there for a few years. The 1841 census shows him at age 45 still residing at Hatherley Court with his wife Dorothy (44) and children Pearson Scott (18), Ann Catherine (17) and Mary Ann (14), along with five domestic servants. However he was forced to sell it later the same year and move into a more modest dwelling in his former Lansdown estate due to financial troubles. Among his contemporaries it seems he was widely disliked; the Cheltenham Looker-On describes him in 1850 as “not very popular among his fellow townsmen” and he had a reputation for dodgy-dealing, impropriety with his clients’ money and selfish pursuit of his own interests. He emigrated to Australia in 1849 in an attempt to revive his fortunes, and died in 1872

This is Emily's sister.
Eugene Bellairs married Maria Margaret Priaulx 1855 in Hobart Tasmania.
Maria had been born in Tasmania to parents Henry Priaulx (Deputy Commissariat General)and Amelia Hide (married 1828 St Peter Port Guernsey). Maria's offspring died unmarried but other members may have emigrated to NZ. Eugene (Surveyor)was present at the Wairau Massacre then went to Tasmania and Victoria before returning to NZ about 1862
what happened in Tasmania