Edward and Elisabeth married 23 Nov 1819 in the Virgin Mary and St Thomas a Beckett Wymondham Norfolk.
Witnesses on their wedding were Thomas Kemball, John Johnson Other Witnesses were Louisa Johnson, Eliza Johnson and Mary Norman Johnson
Sarah was born on 17 Aug 1822 and baptised 18 Sep 1822.St Peter & St Paul Swaffham County Norfolk.
Her fathers occupation at her birth was Gaoler and later governor of the Brideswell.
Sarah Ann Johnson married Jerome Nicholas Vlieland in 1866 In Norwich. 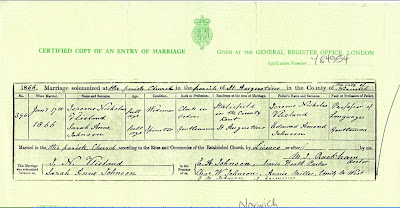 Swaffham Bridewell
Description of the Bridewell in 1868: ‘The County Prison, which was erected in 1787, and considerably enlarged in 1844 at a cost of £1,500. It has a residence for the governor, and contains 67 cells and 3 hospital rooms. The prisoners are employed in mat making, sacking weaving, tailoring, shoemaking, oakum picking, and pumping water from a well 150 feet deep.’
(J.G.Harrod and Co., Directory of Norfolk and Norwich, (London and Norwich, 1868) pp.610-611).
White’s History, Gazetteer and Directory of Norfolk (Sheffield,1883) p. 711 records: ‘The County Prison at Swaffham has been discontinued under the Prisons Act, and was pulled down in 1881.’
In 1822 the time Sarah is born we read:
Swaffham. County Bridewell. — Dietary. Two pounds and a half of bread, made of good household flour, and half a pound of cheese per week; the prisoners are also permitted to purchase a pint of milk per day : hot water and salt are also allowed them.
The governor observes that a surprising difference has taken place with regard to the number of offences and committals since the erection of the tread-mill, and the number of recommittals has also very greatly decreased. The mill has been completed nearly twelve months. The effect of this labour upon the health of the prisoners, is very beneficial.
Posted by Jerome Nicholas Vlieland at 13:36