Who was Jerome ..the answers so far

the riddle of Jerome Nicholas Vlieland

Years ago we were asked to look for the roots of Jerome Nicholas Vlieland in Holland by his relatives in England
His great great grandson told a lot about him as he still did know him.
Jerome Nicholas told him he was a Hollander .His father was Jan and his father again a Jan .
So that made him Jan Janszoon(John John) Vlieland.
He hated the French because they killed his brother Jan .And he was born in 1796.
Ans so started our research.After years of searching ,we found him in Rotterdam .Jerome Nicholas Hollander born in 1796 and son of Jan Janssen .
So he was not only a Hollander , he was named like that as well
So that was it.We found him , his father and mother ,but why did he go to England, why was he called Vlieland and not Hollander. He married and had children.
His son was not only a vicar , but master of languages as well and he wrote books about dancing and knitting . 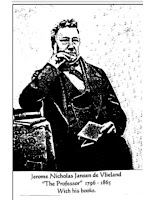 It is always on your mind if you are looking in Rotterdam in the archives in the Napoleontic time.
And today we found in Rotterdam a Jan Vlieland .Maybe the brother who was to be killed later.
He was captain on the ship Wilhelmina .Imprisoned by the French and escaped from the cachot by burning the wood of the prison with the hinges of his bed.
It is an even better story then Les Miserables we think.
So help make the puzzle of this man complete by giving us some pieces of information .
All we know you can find,here
Posted by Jerome Nicholas Vlieland at 16:05 No comments: