Anne Booth
Did It Really Help to be a Japanese Colony? East Asian Economic Performance in Historical Perspective [1]
Demographic indicators are probably a more reliable guide to changes in living standards over time than wage data. We do not have long time series on, for example, infant mortality rates for all parts of East and South East Asia for the early part of the twentieth century, but we do have figures for most countries by the 1930s. It seems clear that infant mortality rates were lower in Taiwan, the Philippines and British Malaya than in Indonesia, Indochina and Burma (Table 14). The data on crude death rates (which are probably less reliable, as they are derived from registration data) tell a similar story. There can be little doubt that infant mortality rates and crude death rates fell in Taiwan over the Japanese period, and life expectancy increased (Barclay 1954: Tables 36, 37 and 39). Kimura (1993: 643) argues that there was also a decline in death rates in Korea after 1920. In the Philippines there was also some decline in both indicators over the American period (Zablan 1978: Tables 79 and 90). Banens (2000: Table 7) shows a decline in infant mortality rates among the Vietnamese population in Hanoi between 1925 and 1938, admittedly from a very high level, while in British Malaya, Vlieland (1932: 110) estimates a fall of around a third in the Straits Settlements between 1911 and 1931. No doubt in all cases, colonial governments would have attributed these declines to better access to modern health facilities, and especially in urban areas, to better provision of sanitation and clean drinking water[9].
Infant mortality rates were often higher in urban than rural areas, probably due to lack of clean water, and poor sanitation. Gooszen (1999: 192-3) cites Dutch research which found very high infant mortality of more than 400 per thousand in parts of Batavia (Jakarta) in 1917-19, which were similar to those reported by Banens (2000: 36) for Hanoi. Vlieland (1932:110) found that infant mortality rates in urban Singapore were higher than in the more rural Federated Malay States.

Vlieland, C.A. 1934.
The population of the Malay Peninsula: A study in human migration. Geographical Review,
24 (1).

Liddell Hart Centre for Military Archives, King's College London: home page
VLIELAND, Charles Archibald ([1890]-1974)
IDENTITY STATEMENT
Reference code(s): GB 0099 KCLMA Vlieland
Held at: Liddell Hart Centre for Military Archives, King's College London
Title: VLIELAND, Charles Archibald ([1890]-1974)
Date(s): Created 1911, 1938, [1960-1965], 1967
Level of description: Collection (fonds)
Extent: 1 volume and 1 file
Name of creator(s):
CONTEXT
Administrative/Biographical history:
Born in [1890]; educated at Exeter School and Balliol College, Oxford; held various appointments in the Malayan Civil Service, 1915-1926; appointed as District Officer, Batang Padang, 1927, and Kuala Selangor, 1929; Superintendent of Census, Malaya, 1930-1932; Economy Officer, Federated Malay States and Straits Settlements, Under Secretary, Straits Settlements and Financial Commissioner and Auditor General, Johore; Secretary for Defence, Malaya, 1938-1941; died in 1974.
CONTENT
Scope and content/abstract:
Papers relating to his life and career, 1911-1942, dated 1911, 1938, [1960-1965], 1967, principally comprising bound typescript entitled 'Disaster in the Far East, 1941-1942', an account of his work as Secretary for Defence, Malaya, 1938-1941, and his assessment of the events leading up to the fall of Singapore, 1942, written in [1960-1965], including a copy of his unofficial report on the defence of Malaya, 1940, and a census map of Malaya, 1931, with covering letter to the Centre and cutting of his article on 'Singapore: the legend and the facts' from the The Daily Telegraph, 1967.
ACCESS AND USE
Language/scripts of material: English.
System of arrangement:
1 volume and 1 file
Conditions governing access:
Open, subject to signature of reader's undertaking form.
Conditions governing reproduction:
Copies, subject to the condition of the original, may be supplied for research use only. Requests to publish original material should be submitted to the Trustees of the Liddell Hart Centre for Military Archives, attention of the Director of Archive Services.
Finding aids:
Summary guide available on-line at http://www.kcl.ac.uk/lhcma/top.htm, and in hard copy in the Centre's reading room.
ARCHIVAL INFORMATION
Archival history:
Immediate source of acquisition:
Memoir and associated items presented to the Centre by Vlieland in 1965. Other papers presented to the Centre by Peter Elphick in 1994.
ALLIED MATERIALS
DESCRIPTION NOTES
Date(s) of descriptions: Oct 1996
Posted by Jerome Nicholas Vlieland at 20:53 No comments:

Wie helpt ons verder in de zoektocht naar de verwanten van Jerome Nicholas?
Who likes to reach a helping hand in the search for the decendants of Jerome Nicholas. Please???
Posted by Jerome Nicholas Vlieland at 20:33 No comments: 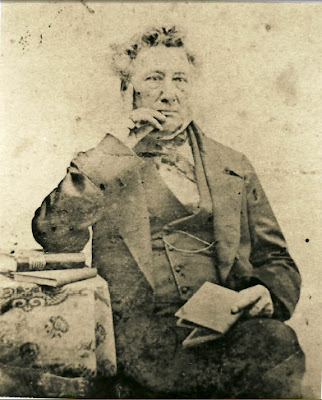 Who was Jerome Nicholas Vlieland ?
He was born 27-06-1796 Rotterdam and baptised 03-07-1796.
His father was Jan Jansen Hollander, his mother Katreina Fres.
Witnesses at his birth are Georg de Wolff and Maria van den Berg. 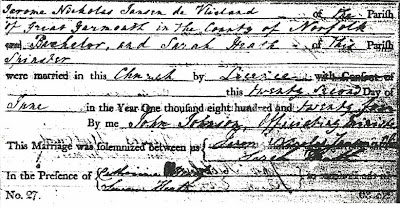 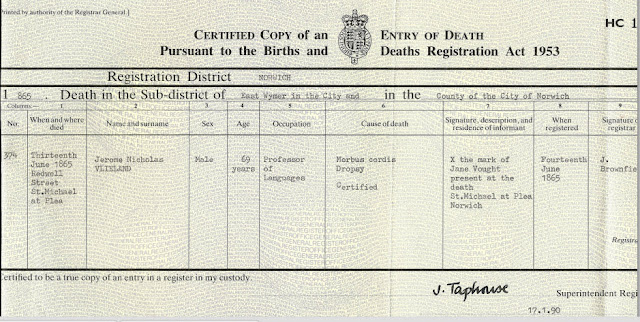 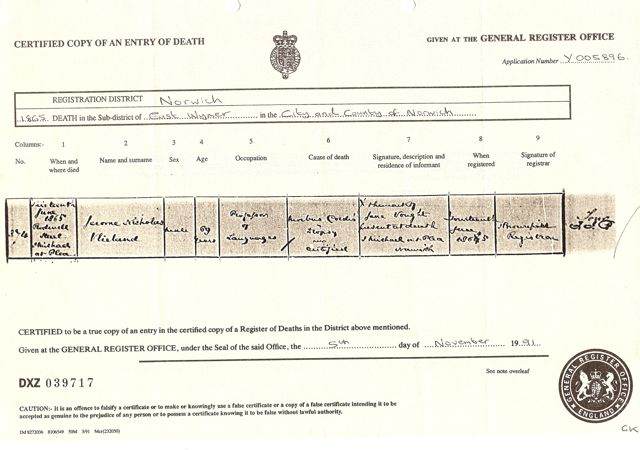 Then there is no information about him for some years.
Until we find him again in Great Yarmouth 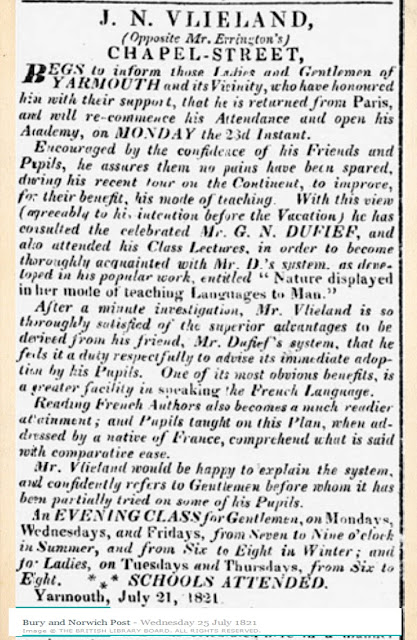 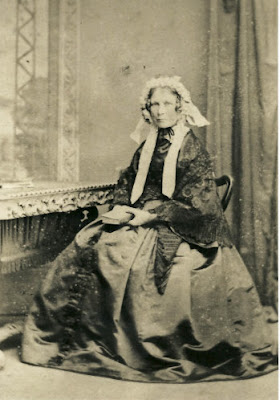 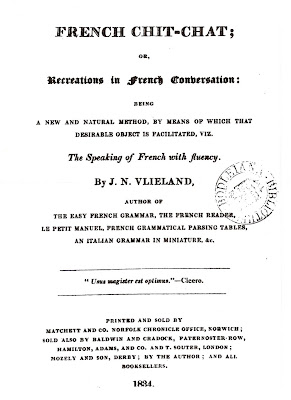 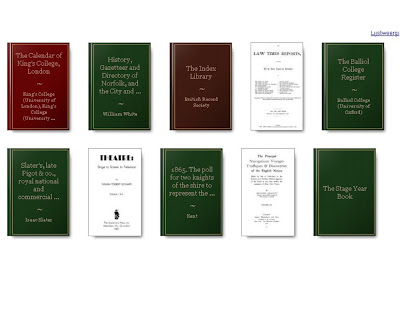 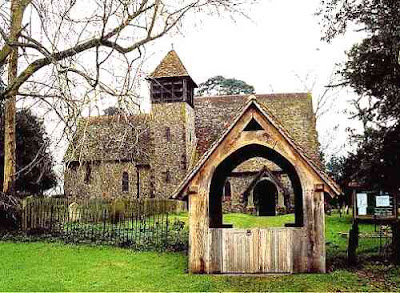 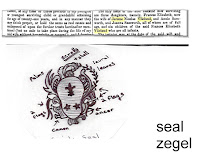 op welke afstamming dit zegel betrekking heeft is inmiddels helemaal duidelijk, maar behoort volgens de overlevering bij de familie Vlieland, evenals een herinneringsbord met de afbeelding van een ooievaar.
This seal belonged to JohnSamworth 's second wife ,She was widow of Charles Lebure from Guernsey and inherited the seal.
It belonged to the Lefevre family of Guernsey.
The vicar and his wife are buried in Stalisfield.
Zij liggen begraven "on the north side of the church and East of the path to the porch
Frances Elizabeth wife of the Rev. J. N. VLIELAND Vicar of this Parish. Died 20th August 1864 aged 38 and The Rev. Jerome Nicholas VLIELAND for 18 years Vicar of this Parish died 22nd January 1877 aged 51."
[from The Monumental Inscriptions in The Church and Churchyard of Stalisfield, Kent. Taken in September 1920 by Leland L. Duncan. Typed up by Christine Pantrey, checked by Zena Bamping] 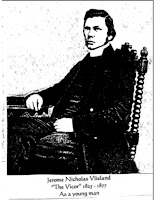 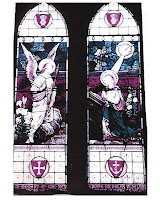 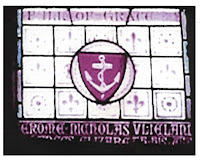 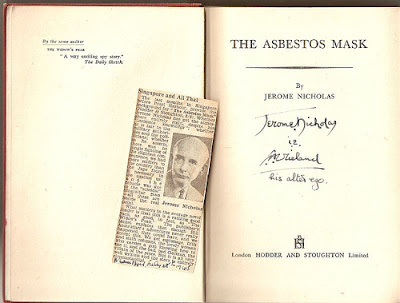 This book was once owned by Kathleen Davies (August 1948). Inside there is a letter to Miss Davies from the author, who signs himself as Archie Wheeland. The endorsement in the book explains that Jerome Nicholas is 'his alter ego'.
The letter itself is interesting:
"Dear Miss Davies
Thank you very much for your efforts over the Birmingham Mail. I am very glad to have the extra copies - one I shall now be able to send to my beloved mother in law, who is the Anne of the dedication (To Another Anne whose spirits as unquenchable as my love for her) and will be thrilled to bits!
I return your copy of the book endorsed on the title page.
Yours sincerely
Archie Wheeland"
So who was he?
We know who he was !
Charles Archibald Vlieland
Wij weten wie Archie Wheeland was. Hij is een kleinzoon van Jerome Nicholas, deze Charles Archibald Vlieland
Hij was Colonial Administrator, geboren in 1890, overleden in 1974. Woonde in Alton, Hampshire, England. Hij was de vader van Margaret Frances Morgan Vlieland die overleed 19-03-1969. Zij huwde 12-11-1938 met Brigadier Edward John Clervaux Chaytor.

Completeing a Stewardship describes the process of British disengagement from Malaya and Singapore during the era of Asian nationalism. Heussler adds to previous studies of decolonization and disengagement a new and important perspective: the views and daily work of the members of the Malayan Civil Service who were at the center of affairs until the end of British rule. The book concentrates on the people and events that influenced administrative preparations for independence. The importance of Completing A Stewardship lies in its attention to the British management of preparations for self-government. By combining official records with diaries, letters, personal papers, and interviews with many important participants, Heussler offers a full and balanced view of the end of the British Empire in Southeast Asia.
Completing a Stewardship: The Malayan Civil Service, 1942-1957 - Pagina 233
door Robert Heussler - Political Science - 1983 [ISBN 0313239304] 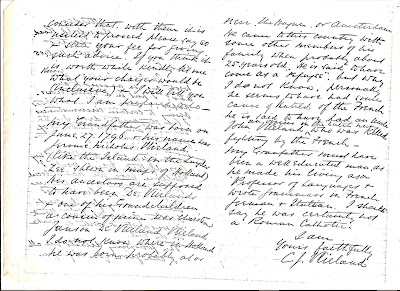 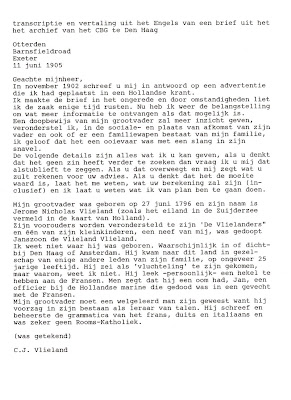