John Samworth was married first to Ann, and second to Elizabeth Lefebvere, a widow, on Dec, 8, 1808 in St. Alphege, Kent.

He had 3 children by his first wife: John, Mary and Ann all born in the Royal Naval Hospital, where John, Sr, was chief clerk in the steward's department of the Greenwich hospital.
He was appointed by his patron, the late Lord Sandwich, junior clerk in the year 1772.

In the English Vlieland family this  seal is kept and treasured for it was thought to be the crest of Jerome Nicholas Vlieland . 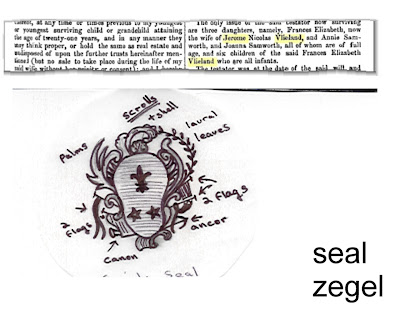 But the Dutch center for heraldry found out is was the crest of the Lefevre family of Guernsey.
So how did this seal ended up in the Vlieland family who could it belong to?
Well the connection with the Lefebures as the original name of the Lefevres is from Elisabeth Lefebures.
She had a will dated 1824 and proved 1827.
She married on 8 December 1808 at St Alphage Church Greenwich when she was 48 years old with John Samworth of Greenwich Kent.
She is described as late Elizabeth Lefebure widow
This John Samworth had a son John Samworth junior by his first wife Ann Chapman.
He was  born in 1790.
This son had a daughter Frances Elizabeth Samworth in 1825 and she married Jerome Nicholas Vlieland the younger or the vicar as we say.
The seal must have past down in the family to Frances Elisabeth her and with the passage of time came in  the Vlieland family.
So that was the story of the seal .
Posted by Jerome Nicholas Vlieland at 12:42