She married -as his second wife -John Samworth and had 4 children .

One was born after his death. 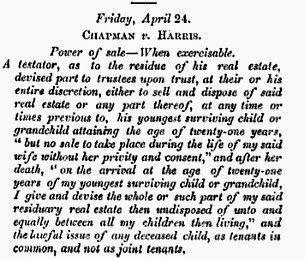 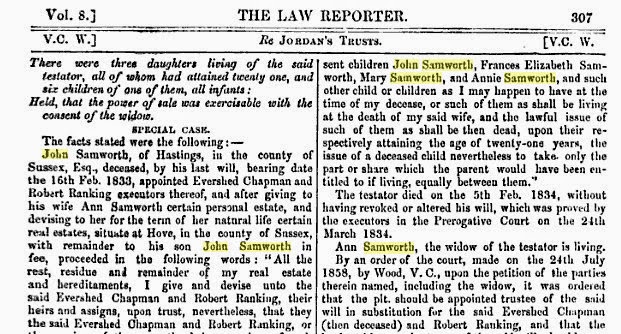 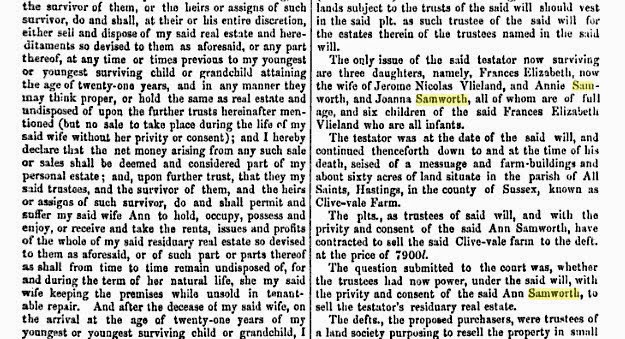 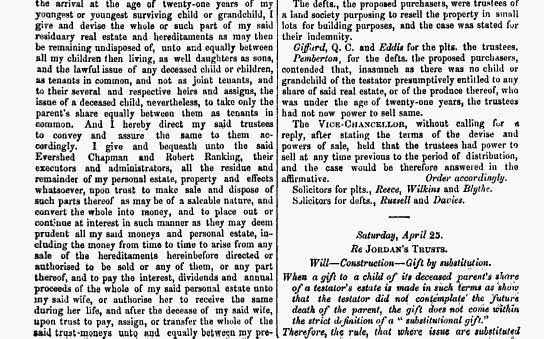 
Turnham Green, in contrast to Old Chiswick or Strand-on-the-Green, has only scattered reminders of its genteel past. (fn. 3) Arlington Cottage is the only survivor of the small 18th-century houses which were once characteristic of the area around Turnham Green common. Of houses which faced the south side of the common in the early 19th century, nos. 10-11 Heathfield Terrace form a pair of three storeys next to the similar but plainer nos. 12-13. Afton House, Bourne Place, at the north-east end of Duke's Avenue and in 1979 used by Chiswick memorial club, represents the larger residences built c. 1800, when Bolton House and Linden House stood immediately to the east. It has three storeys and has rusticated stucco on the ground floor. Near by in Chiswick High Road a three-storeyed pair with Coade stone dressings, also of c. 1800, serves as the presbytery of the Roman Catholic church. Farther east the south side of Chiswick High Road contains the late 18th-century no. 183, also three-storeyed. Nos. 3-21, close to the boundary at British Grove, form a uniform three-storeyed range of yellow brick and stucco, ornamented with giant pilasters. They illustrate the built up appearance of the high road c. 1835. 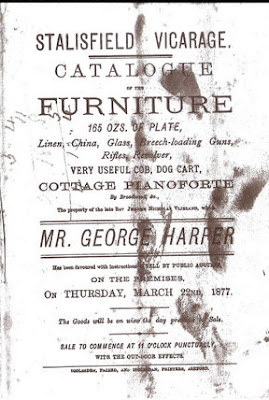 Because of the catalogue we continue with the Stalisfield Vicarage.
In the London Gazette we find
29 July 1870
WE, the Ecclesiastical Commissioners for England, acting in pursuance of the Act of thetwenty-ninth and thirtieth years of Her Majesty,
chapter one hundred and eleven, sections five and eleven, do hereby grant and appropriate out of our common fund to the vicarage of Stalisfield, in the county of Kent, and in the diocese of Canterbury, one capital sum of fifty-one pounds sixteen
shillings and ten pence, such capital sum to be applied by us in discharging the. amount payable to the Governors of the Bounty of Queen Anne for the augmentation and maintenance of the Poor Clergy, under a subsisting mortgage of the said vicarage of Stalisfield, which was effected by a deed bearing date the twenty-fifth day of November, in the year one thousand eight hundred and forty-one, for the purpose of providing a parsonage or house of residence for the said vicarage of Stalisfield.
In witness whereof, we have here unto set our common seal, this twenty-first day of
July, in the year one thousand eight hundred and seventy.
(L.S
and 27 Januari 1871

"WE, the Ecclesiastical Commissioners for England, acting in pursuance of. the Act of the twenty-ninth and t h i r t i e th years of Her Majesty, chapter one hundred and eleven, section five, do hereby, subject as h e r e i n a f t er mentioned, grant and convey to the incumbent of the vicarage of Stalisfield, in the county of Kent, and in the diocese of Canterbury, and to his successors, Incumbents of the same vicarage, all those annual tithe commutation rent charges which are particularly
described in the schedule hereunto annexed, and are now vested in us, to have and to hold the said tithe commutation rent charges to the use of the said Incumbent and his successors for ever:
Provided always, that the said tithe commutation rent charges shall be and be held to be in lieu of
and in substitution for the annual stipend of twenty-five pounds, heretofore payable by us the said Commissioners to the Incumbent of the said vicarage, in respect of certain property formerly belonging to the Archbishoprick of Canterbury : And provided also, that the said tithe commutation rent charges shall also be and be held to be at all times for ever hereafter charged and chargeable in exoneration of all other property whatsoever, now or formerly' belonging to the said Archbishoprick of Canterbury, with the liability to repair and maintain the chancel of the church of
Stalisfield aforesaid; and provided further, that the Incumbent for the time being of the same vicarage shall be entitled to receive from us, or on our account, the net amount of the rents, profits, and proceeds of the said tithe commutation rent charges as from the first day of October, in the year one thousand eight hundred and sixty-nine.
In witness whereof, we have hereunto set our common seal, this nineteenth day of January, in the year one thousand eight hundred and seventy-one.
(L.S.)

ANN SAM WORTH, Spinster, Deceased.
Pursuant to the statute 22nd and 23rd Victoria, cap. 35, intituled " An Act to further amend, the Law of Property, and to relieve Trustees."
WHEREAS Ann "SamwortL., formerly of No. 11,
Heathfield-terrace, Turnham-green, in the county of Middlesex, but late of Stalisfield Vicarage, Stalisfield,
in the county of Kent, Spinster, died' at Stalisfield Vicarage aforesaid, on the 31st day of December, 1871, having first made and executed her last will and testament, dated the 7th day of October, 1864; and whereas probate of the said -will was, on the 2nd day of March, 1872, granted, out of the Principal Registry, of Her Majesty's Court of Probate, to the' Rev. John Gudgeon Nelson, John Alfred Lumb Airey, two of the surviving executors named in the said will ; now notice is hereby given, that
all creditors and other persons having any claim or claims,
demand or demands, against the estate of the said Ann Samworth, deceased, are hereby required to send in the particulars of their claim or claims, demand or demands,
to the said Rev. John Gudgeon Nelson, and the Rev. John Alfred Lumb-Airey, the said executors, at the office of their Solicitors, Messrs. Pritchard and Sons, of No. 18,
Great Knight Eider-street, Doctor's-commons, in the city
of London, on or before the 1st day of June next, after which time the said executors will proceed, as they may be advised, to distribute or otherwise deal with the
assets of the said deceased, among the parties entitled thereto, having regard only to those claims of which they shall have then had notice ; and the said executors
will not after that time be liable 'for the assets, or any part thereof, so distributed or dealt with as aforesaid, to any person of whose debt, claim, or demand they shall not then have had notice. — Dated this 28th day of March,1872
In the church in Stalisfield are stained glass windows with the name Jerome Nicholas on them.
Stalisfield Church


Auction of the Stalisfield vicarage

Posted by Jerome Nicholas Vlieland at 12:26