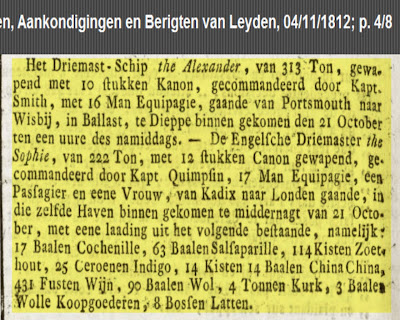 From Rotterdam 1812 we learn:
An English vessel, the Alexander, with 16 passengers aboard,near the Holland coast had to come to land for different reasons.
The customs succeeded in Noordwijk to catch four passengers and in Zandvoort
four were also detected.
In Den Haag the police succeeded to capture the wife and daughter of a certain Philip Adam.
Adam was sharply guarded by the police
Marivault the police inspector was full of hope for the missing 6 travelers to be found, although he suspected that the fishermen continued helping people in every way.
Of the detained passengers Marivault learned how such a landing was done.
The ships came under French flag.
Usually it happened at midnight and in between Katwijk and Noordwijk.
A sailor whistled until one of them connected with the coast.
Then the same was repeated in another place.
The coast guard got a few guineas for their help and the people were then in batches of eight to ten men landed.
Marivault did everything the catch the Coast Guards red handed but without
success.
In the night of July 4, 1812 in Noordwijk again the passengers were brought ashore, first twelve and later six.
Of these six, four were arrested.
The others, under which an Italian ,escaped
Although the Director of Customs knew of the arrival of this vessel he did not take measures
When Marivault learned that two people were arrested in July 1812 he was happy.
But it was not the end of the story.
In the newspaper we read the story of the Alexander,

Posted by Jerome Nicholas Vlieland at 20:30