Frederick Charles Petter (son of Gervase Petter and Eliza Sarah Forster) was born 17 Oct 1857 in Tottenham Middlesex, and died 04 Apr 1893 in Deptford London. He married Marie Elizabeth Simpson on 17 Jun 1876 in Kennington London.
He is the father of Archibald Graham Petter

We found the family tree on wikitree. There are more family trees on the internet .they just have two children . 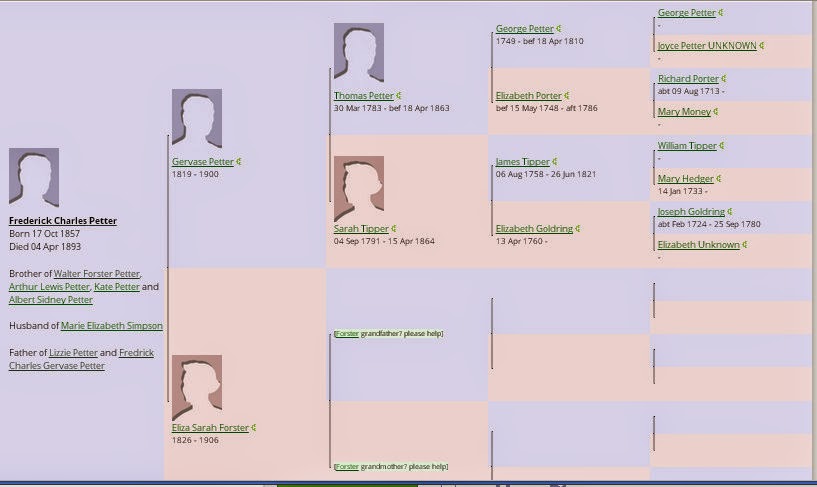 Children of Frederick Charles Petter and Marie Elizabeth Simpson are:

There are more children we know from his granddaughter .
We let her introduce them
It makes it clear just what an action-packed life Frederick must have had as a 'traveller' = a commercial representative selling goods for a company, a bit like his son Cecil but not so grand. I knew he died young, but not so young: married at 18, dead at 35 and supposedly 12 or 13 children in between!
Frederick Charles Gervase must be the one who I heard called 'Jarvis' (= Gervase) who was killed on stage when the Zeppelin fell on the London Music hall in the First World War.
Marie Elizabeth was I think born in 1853, so five years or so older than Frederick:
I wonder if she was a widow with children, as to have so large a family in 16 years seems amazing.
She died at 90 in late January 1943, a week before Archie's second wedding on 3 February 1943, as I know there was a chance the ceremony might have to have been be put off.
Apart from Frederick Charles Gervase I have found Lizzie (b. 1877), Mary Ann (b. 1880 and d. 1881); Cecil Henry (b. 1881) who I met but don't remember in about 1950, who was a trader in furs, silks and jewels for the Hudson's Bay Company; Thomas and Edith Mary (b. 1883 = twins?); Archie (b. 1885); but that is only seven of them! There must somewhere be a Constance (?Mary) who I met at the same time as Cecil and who was the spinster daughter who looked after Marie Elizabeth. If we guess that the last child was born in 1892 there is space for several .

A London commercial traveller in the 1880s and 1890s
Commercial travellers, like Frederick Charles Petter, had an ambiguous social standing. They were below-average earners in a peripatetic and insecure profession, but often aspired to be lower middle class in their lifestyle and the education of their children. By 1881, Charles Frederick was living with his wife and eldest two children in the recently built suburb of Brockley in Kent, just outside the London metropolitan boundary and several rungs up from the more urban Tottenham where he had been born, and was able to employ two domestic servants. By 1891, with at least nine family mouths to feed, he seems to have moved closer to the inner city, to Denmark Hill in Camberwell, another newbuild area but probably cheaper than Brockley and involving less expense in train travel if he needed to go into central London: there were cheap workmen’s tickets for regular working travellers. However, by this time he was able to afford only one person to help in the house.
A commercial traveller ‘on the road’ took samples, catalogues or pattern books of the products (tobacco, confectionary, linens, ladies’ corsetry) of a firm (such as Coats’ draperies, Wills’ tobacco, Wolsey’s underwear or McVitie’s biscuits) to shopkeepers who might place an order for the branded goods in which he travelled, perhaps making up to 45 calls a week; he (it was a very male profession) often also spent ‘wasted’ non-earning days canvassing for new business in areas off his usual territory. If he travelled in linens and drapery for firms such as Liberty’s, there would be a very busy period in the spring and autumn ahead of the new summer and winter fashions, but then very little work for the rest of the year. Travellers were white-collar workers, either self-employed and dependent on commission or employed directly by a company (a traveller employed by Wills’ could earn up to £400 a year).  They defined themselves as professionals within a closed fraternity and needed to be self-confidant in selling both themselves and their goods and resilient, since much of their territory had to be covered on foot, omnibus or train in all weathers. They had a professional body, the United Kingdom Commercial Travellers Association (UKCTA), founded in 1883, which gave insurance cover against damage to goods or incapacity to work and help in legal matters, and a School in Wanstead in east London, to ‘feed clothe and educate the necessitous children of brethren “on the road”’. Travellers might have a local territory so that they came home every night, but could be away from home for a week (sometimes even a month), when they stayed in one of a dedicated network of cheap hotels catering for itinerant guests, some being ‘temperance’ establishments where no alcohol was served. This made domestic life very strained, with the burden of keeping home and raising the children on a fluctuating income falling on Marie Elizabeth and a family that grew by a new child more or less every two years from 1877 to 1890.

Posted by Jerome Nicholas Vlieland at 13:36