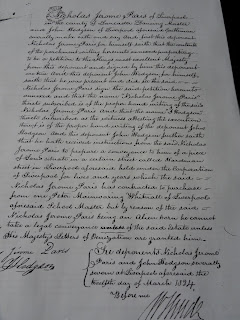 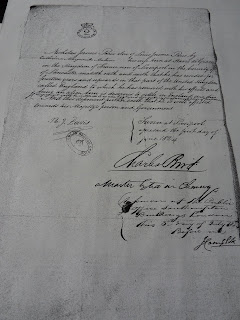 Always interested in any Nicholas or  Jerome who pops up in a newspaper or archive .
And specially  has something to do with teaching or Holland or  France you go on alert .
So when finding all this combined at the right time  in 1824 and  in denizationpapers as well in the National Archives in Kew  you think this could be it.
Now the story of Jerome Hollander Vlieland will be reveiled.
As there is no more information to gain in advance ,only the entry in the catalogue of the National Archives ,
you order the copies not knowing what to expect .
And when they finally arrive in a big brown envelope A3 size .
You feel like winning  the lottery .
But no,it was truely about a  Nicholas Jerome Paris .who was Dance Master in Liverpool, who was an alien and wanted denization papers so he could buy some property ,without giving up his foreign nationality .
So let me tell you what was in the envelope.
I will trancribe the first page
Nicholas Jerome Paris son of Louis Jerome Paris by
Catherine Marguerite Mahieu his wife born at Havre de Grace
in the kingdom of France now of Liverpool in the County of
of Lancaster maketh oath and saith that he had resided for
fourteen years and upward in that part of the United Kingdom
called England to which he has removed with his effects and
being an alien born is desirous to settle in England and his
deponent  saith he intends to make England his future and permanent place of residence.
And this deponent further saith that he is well affected
towards his Majestys person and  Government

Sworn at Liverpool
aforesaid the first day of June 1824

sworn at the public
office southampton
buildings London
this 33 th daay of July 1824
before me
And we find in Gore s  book and in Liverpool Schools
Paris Nicholas Jerome, dancing master, 4, Hardman street
....................academy, 1, Pilgrim street

But that is not all it will be continued.
From now on each day here will be a declaration of a citizen of Liverpool appear .
William Macmurdo Duncan.
George Orred
William Pulford
John Gladstone
Charles Lawrence
Joseph Pilkington Brandeth
John Hodgson

Posted by Jerome Nicholas Vlieland at 15:34