We asked you to help us find more information about the Snell family and in less then one hour we knew quite a bit.
Due to an holiday it took some time to put it in the blog.

Alice Mary Snell is the daughter of  Charles Henry Snell and Sarah Heath Vlieland .
The first thing we hear from her is in the census .

this Clarendon House.
The School catered for the daughters of officers in the Army and Navy and of those in the professional classes.
And we know that at the time of his marriage Charles was in the army.
It was quite a mixed class as some pupils were born in India, Australia, Antwerp, Jersey.

Then there is the marriage of Alice Mary Snell in the paris Church of Camberwell in Surrey.
She marries Lewis William Murrayton Murray in January 1882
one of the witnesses was her dad - the other seems to be Catherine Veri Vlieland Snell her sister. 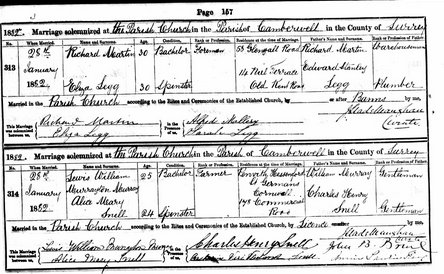 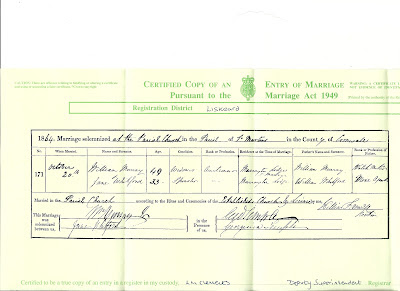 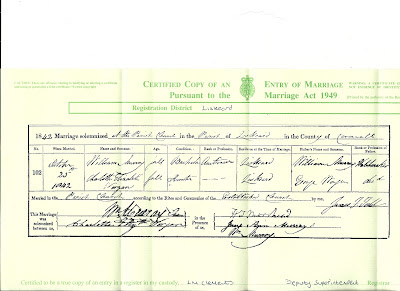 The early life of Alice Mary Snell contained some turmoil , with the erratic behaviour of her father Charles Henry Snell, no doubt causing her much grief. Her problems would return.

In the blog of woensdag 22 augustus 2012 we learned about her marriage to Lewis William Murrayton Murray on 28 Jan 1882. Lewis is born in Cornwall in 1856 and in the 1881 census is shown as a farmer employing 2 men. He dies in 1894 aged 37 leaving his wife with three young children. The story of what happens is tragic.


The 1891 census shows him at Pevrith Windsor, St Martin, East Looe Cornwall He is 35, a farmer with his spouse Alice Mary Snell 33 (daughter of Sarah Heath Vlieland). They have 3 sons William Charles 8, George Frederick 6, John Coxetter 4, all born St Martins, Cornwall and they have two servants.


He is a successful farmer and horse breeder. The Western Times of 07 August 1891 reports on the West of England Horse Show where his horses win prizes:

He is also, unfortunately a drinker; seemingly on a 'too regular' basis. One visit to his local had tragic consequences! He is good friends with Joseph Congdon of Badham, Duloe and on 27th March 1894 they both seem to drink too much, ending up in The Bell Hotel at Liskeard.


19 April 1894 - Cornishman On a charge of the manslaughter of Lewis William Murray, Joseph Congdon, of Badham, Duloe, was on Thursday at Liskeard committed to the ensuing assizes

14 June 1894 - Western Morning News report of the Cornwall Summer Assizes which had resumed the previous day tells the story of his trial of "for the manslaughter of Lewis Wm. M. Murray" as does the Royal Cornwall Gazette, both in great depth. This is a summary of the various reports. Witnesses and reporters have differing accounts. This seems to be the most likely story:.


Murray, 37, "a gentleman farmer living near Looe" had long been a 'hard liver' and heavy drinker (rendering him more prone to erysipelas" an acute, febrile infectiousdisease, caused by a specific streptococcus, characterized by diffusely spreadingdeep-red inflammation). The accused was a man of means living in Liskeard. They met at the Barley Sheaf Liskeard after the cattle market where they had a good deal of drink.

They then both ended up at the Bell Hotel, Congdon considerably the worse for drink. Murray, it is suggested, was so drunk at the Bell Hotel that Congdon suggested that they went home together .... Murray shook him off and would not go. and Congdon had sat on the bench behind the door and fallen asleep . In due course someone, possibly Lewis, tried to wake him from his drunken sleep by shaking him by the arm and putting his hand on his his head.

...witnesses agree both prisoner and deceased were the worse for drink ... one saw the prisoner who was flourishing his stick hit the deceased with it...the two men closed, struggled and then fell...as Lewis fell either struck or passed close to the edge of the seat... bleeding from a wound over the left eyebrow. ... one witness said that Lewis thought "it was nothing" another that he told Congdon "You have struck me with a stick . I will make you pay for it" (three men, including Courtney Sergeant, Bell landlord, when cross-examined confirmed that they had not seen the actual blow)..

...both were turned out and Murray rode the three and a half miles home....widow Alice stated he came home at 11:15 PM ... following day ...complained of being distracted in the head which became very much swollen. On March 29th she called in Drs Bond and Harty. The wound was poulticed but Murray continued to get worse and on 2nd April he died.

Alice was, as you see above, called by the prosecution and reported a conversation with her husband's friend. to quote the Western Morning News: After the inquest prisoner called on her and said ... "I should not have done it if there had been anyone to take me away; but that is the worst of the Bell. They will let you do anything you like there...""

Dr William Hammond of Liskeard who performed the post mortem ...(said) deceaseds skull was the thinnest he had ever seen. It was semi transparent and a really violent blow must have fractured it. .... the liver spleen and kidneys were diseased ... caused by excessive dirinking ... never seen organs in such a state ...

The defence summarised that, though Congdon had struck out wildly with the stick and hit two of the company, there was no evidence that he had actually struck Lewis.

Character witnesses including his Vicar, Reverend Bush, and his Bank Manager reported Congdon "bore a high character as a peaceful good natured man incapable of an unkind action"

The Judge's summing up was that the jury had to decide whether Joseph Congdon had struck the blow (the fact that such a blow would not have killed a fit man was irrelevent) or whether Lewis was the aggressor and Lewis had struck his head on the bench and the jury returned a verdict of not guilty and prisoner was discharged.


And what of Alice Mary Murray (nee Snell)? Her words to Joseph Congdon at that meeting after the inquest sum it up: "You have left me in a dreadful place with three boys to bring up". Joseph had told her "I will help you. I will make recompense". Alice's Mother in Law Jane who had been present had said "You will have to Mr Congdon..." I have as yet been able to trace none of the four in subsequent censuses....

Many Thanks to Ray for all this information!

and to Gilly for the certificates !

I recently read your blog post on the MURRAY family (http://jnvlieland.blogspot.com/2012/08/alice-mary-snell.html) and it helped me understand on of George Worgan's daughters - her name was Charlotte and she was William Murray's first wife. i cited you in the post:
randomfh.blogspot.com/2014/08/children-of-george-worgan.html

Posted by Jerome Nicholas Vlieland at 12:33