Who was Hilda Vlieland Wakefield ?
The name popped up on the internet.
Curious as we are , we wonder...........is she named after a Vlieland?
Or is her mother a Vlieland ?
We try and find out .
So while searching we found some information
name: HildaWakefield
event:Census
event date:31Mar1901
gender:Female
age:6
relationship to head of household:Daughter
birthplace:Gt Yarmouth, Norfolk

This person was registered in Yarmouth June 1895 4b 7, her birth certificate will give her parents and the mother's maiden name
In 1901 she was living with her mother in Gt Yarmouth
Mary Ann aged 39 b Winterton
Lily aged 19, silk weaver b Gy Yarmouth
Joey aged 16 fisherman b ditto
Celia aged 10 b ditto James aged 8 b ditto
HILDA aged 6
In 1891 Mary Anne was in Gt Yarmouth with LOUISA? aged 8 , later recorded as Lily Joseph aged 6 and Celina aged 6 months - the absence of a father may indicate he was a fisherman
In 1911 as you know Hilda and her family were living with a fisherman , Edward Bishop.
Mary Ann says she had been married for 30 years and had 6 living children
There is a marriage in Yarmouth in Sept 1881 for a James Wakefield to Mary Ann Green. 4b 26. 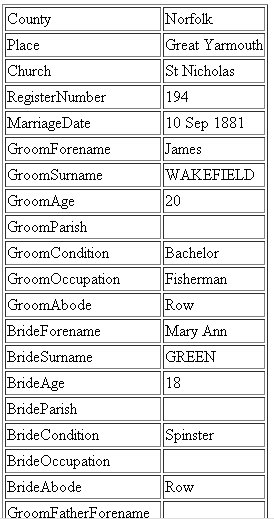 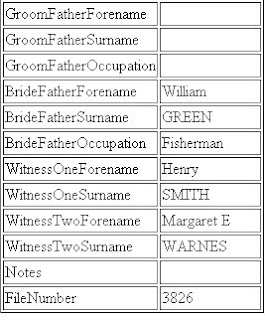 This couple can't be found together on any census so I suggest you get Hilda's birth certificate to confirm her parents
Hilda married Donald Mace in 1916 in Yarmouth -
Mary Ann Green was living in Yarmouth in 1881, the daughter of William, a fisherman net maker b Winterton and Sarah, a silk factory hand also b Winterton.
Thanks Pat !
So we  know a lot allready but why is there Vlieland in her name.?????

Posted by Jerome Nicholas Vlieland at 12:27