Eveline Vlieland Candler was the daughter of Lawrence Candler and Anna Maria Vlieland..
24/02/1915 Newcastle Journal - WEDDING AT SUNDERLAND.
She was born in 1875 East lodge Crook Durham.

The marriage took place yesterday. at the Friends’ Meeting House. Sunderland, of Mr Wm. Roach Thomas, of Bank House, Sunderland, who has lately retired on a pension from the management of the High Street Branch of Messrs Barclay’s Bank, with which he had been connected for forty years, and Miss Eveline Vlieland Candler, youngest daughter of the late Mr Lawrence Candler, of Crook, county Durham, The bride, who has resided in Sunderland for several years. is connected with the Society of Friends. After the bride and bridegroom had made the usual declaration, Mr Herbert Corder gave a short address, in which he offered congratulations, and felicitations on the event. The honeymoon will be spent at Edinburgh. 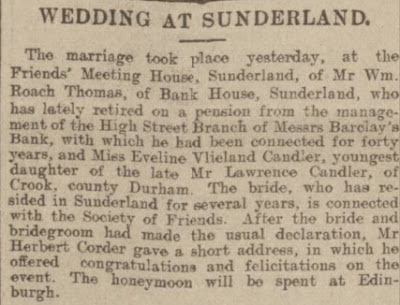 On 6 Apr 1875 a Marriage occurs at St Mary Putney (in the Borough of Wandsworth) between William Roach Thomas Full Age bank clerk and  Amy Morris.

William Roach Thomas moves North and the 1911 census shows him at Banks House West Sunniside Sunderland. He is, by now, a bank manager, age 60 with his spouse Amy (65) and a companion Eveline Vlieland Candler.
The death of Amy Thomas, now 68 is registered in Q4 1913. (Sunderland vol 10a P 732).
Eighteen months later, as we have already seen, he marries the companion,Eveline. He has, by now, retired on a pension (as shown in the previous article).

Eveline dies half a century later aged 91 on 30 Oct 1966 at 14 Vilette Path Sunderland and probate is granted to Muriel May Rawlinson - married woman. Her effects: £1,300.

The marriage was at the Friends ´meeting House in Sunderland.
The meeting place of Quakers or Friends
In the past, Quakers were known for their use of thee as an ordinary pronoun, refusal to participate in war, plain dress, refusal to swear oaths, opposition to slavery, andteetotalism -- the opposition to alcohol. Some Quakers have founded banks and financial institutions including Barclays, Lloyds, and Friends Provident; manufacturing companies including Clarks, Cadbury, Rowntree, and Fry's; and philanthropic efforts, including abolition, prison reform, and social justice projects.
Posted by Jerome Nicholas Vlieland at 10:58