He was the son of Lawrence Candler and Anna Maria Vlieland.
entree in the Tasburgh baptism register.

St Mary's church is old possible Anglo-Saxon in part as evidenced by the well preserved round tower which is often indicative of an early date. The church, built at the western end of the village, sits in a pleasant churchyard with views over the Tas valley. Other than the tower the main body of the church is typical Norfolk Perpendicular with the almost obligatory Victorian improvements, in this case an excellent hammerbeam roof.


And about the Mechanics' Institute Crook .
In the last few years many improvements have been made.
The building contains a large public hall, holding seven hundred persons, a library of nearly one thousand three hundred volumes, reading room and ante-rooms, and a bilhard room containing two tables. The billiard players attached to the place have always been of more than average local ability.
The membership varies from two hundred and fifty to three hundred,
paying an annual subscription of four shillings ; ladies paying two shillings.
Mr. Edward Milburn, now residing at Tow Law, was secretary for some years.
He was succeeded by Mr. Thomas Burnip, the present respected secretary of the local Co-operative Society.
Mr. Burnip held the post of secretary for twenty-seven years, and much of the
success attaching to the Institute has been the result of his capable handling of its affairs.
Mr. E. F. Peart is the present secretary, and Mr. Samuel Candler, a prominent townsman, is president.
The Institute possesses a handsome cup, valued at fifty-five guineas, which was won outright in a miners' billiard competition some years ago.
The billiard team, since that success, has also won the Bishop Auckland and
District League championship on five occasions, and the Crook and District League once. 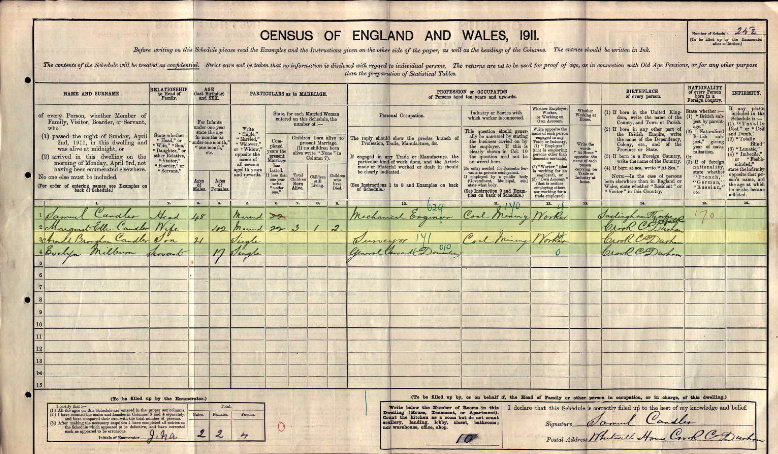 he married Margaret Ellen Brougham on the 24 December 1888 in Durham .
The was a special license needed because the bride was to young.
Their son is Arnold Brougham Candler born dec 1889.Auckland.
Posted by Jerome Nicholas Vlieland at 11:33