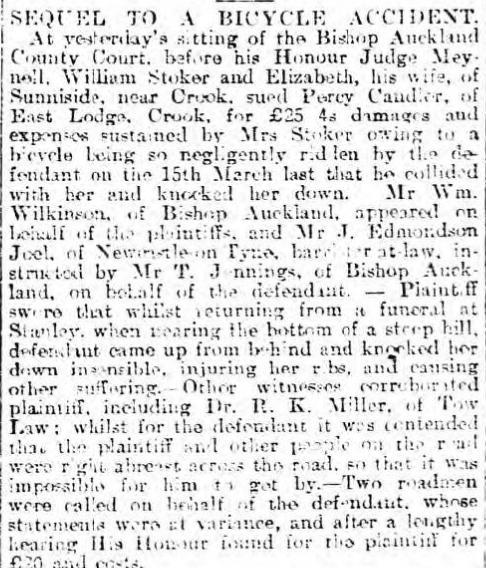 14/02/1900 Northern Echo - Crook Rider pays heavy damages - Percy Candler, of East Lodge. Crook, assistant viewer, was sued for £25 4s for personal damages by Wm. Stoker and wife, of Sunniside....On 15th March last year... . Mrs Stoker was knocked down by a bicycle ridden by the defendant, ... 4 weeks in bed ... 12 in bandages ...She recieved a letter "from Mrs candler and Son" stating that they were sorry for what had occurred and enclosing half a crown which they returned, .judgement was found for the plaintiff in the sum of £20.
another article in Daily Gazette for Middlesbrough on Wednesday 14 February 1900 is appended


Percy Philps Candler's Father Lawrence Candler (1833-1912), who married Anna Maria Vlieland, had one sister Mariana Candler (1836-1917). She and husband John Brown Jr of Erith, Hunts (married 10/03/1864 at the friends meeting house Upper Goat Lane Norwich) had two sons, both Ackworth Scholars (a famous 'Friends' school). The younger was Oliver Philps Brown (b1880). The younger was John Lawrence Brown (b1875) - so both surnames were used!

thanks Ray
Posted by Jerome Nicholas Vlieland at 12:14