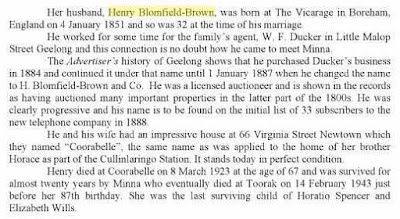 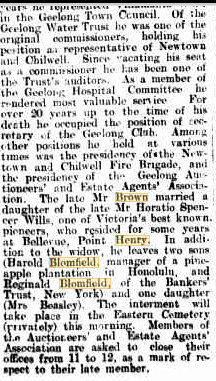 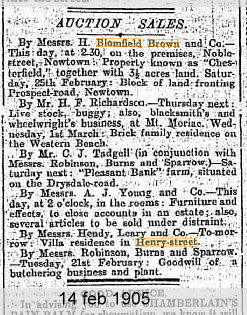 passed away. He had been in failinghealth for some time, and recently
spent a holiday at Lorne recuperating.
Although still indisposed he attendedat his office Tuesday morning, but
on the advice of his medical attendant returned home later in the day. He
gradually became weaker and succumbed about 8 o'clock yesterday morning.
The late Mr Blomfield Brown was one of Geelong's best known citizens. He
was born at Boreham, County Kent,England, on 4th January, 1851. His
father was the late Rev. Henry Brown ,rector of Woolwich and Canon of
Rochester Cathedral; while his grandfather was the late
Right Rev. Charles James Blomfield, Lord Bishop of
London. Leaving England as a young
man he settled for a time in India,having the managership of large tea
plantations in Ceylon and Southern India. About 43 years ago he came
to Australia, subsequently settling inGeelong. He became associated as
partner with the late Mr. W. F.Ducker, eventually acquiring the busi
ness which for many years past he successfully conducted under the title
of H. Blomfield Brown and Co. The late Mr Brown took an active part in
public affairs. He was for some time a member of the Council of the Borough of Newtown and Chilwell, and on three occasions occupied the mayoral
chair. From 1885 onward for several years he represented Villamanta Ward
in the Geelong Town Council. Of the Geelong Water Trust he was one of the
original commissioners, holding his position as representative of Newtown
and Chilwell. Since vacating his seat as a commissioner he has been one of
the Trust's auditors. As a member of the Geelong Hospital Committee he
rendered most valuable service Forover 20 years up to the time of his
death he occupied the position of secretary of the Geelong Club. Among
other positions he held at various times was the presidency of the New
town and Chilwell Fire Brigade, andthe presidency of the
Geelong Auctioneers' and Estate Agents' Association. The late Mr Brown married a
daughter of the late Mr Horatio Spencer Wills, one of Victoria's best known,
pioneers, who resided for some yearsat Bellevue, Point Henry.
In addition to the widow, he leaves two sons(Harold Blomfield, manager of a
pineapple plantation in Honolulu, and Reginald Blomfield, of the Bankers'
Trust, New York) and one daughter(Mrs Beasley).
The interment will take place in the Eastern Cemetery
(privately) this morning. Members ofthe Auctioneers' and Estate Agents'
Association are asked to close their offices from 11 to 12, as a mark of re
spect to their late member. .


More information : The Browns
Posted by Jerome Nicholas Vlieland at 21:06