While looking for information about Jenny Amelia Ford  the wife of Herbert Bloomfield Vlieland  we found an extended  family tree of the Henderson  family  which you can read here now .
Jenny Amelia Ford was the daughter of Laurence A Ford and Amelia Henderson .
click on the tree and you will see a clear picture . 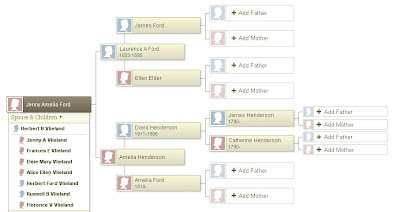 
Lena Alice Henderson, dau of William & Hannah E. (Mitchell) Henderson was b. 6 Apr 1874; d. 5 Dec 1867, buried Last Rest Cemetery in Merrimack NH; m. 22 March 1893 to Rev. Elisha Ayers Keep, only son of Marcus Rodman & Hannah Maria (Taylor) Keep. She d. 5 Dec 1896 at Conway NH. He was b. 22 Dec 1854 in Ashland, Aroostook Co. Maine. He studied law and was admitted to the bar in Maine and NH, practicing for 6 years at New Market NH. During his residence at New Market he was for 5 years superintendent of schools. He entered Andover Theological Seminary in 1885 and graduated in 1888. While studying at the Seminary he preached for a year at East Andover NH. He was ordained and installed pastor of the First Congregational Church at Merrimack NH on 28 June 1888 remaining nearly 7 years. In 1891 he took a trip abroad. During his pastorate at Merrimack NH nearly 96 members were added to the church. He was very active in the movement that resulted in the establishement of a free public library in Merrimack NH. He was dismissed from the Merrimack pastorate in December 5, 1894 at his own request. He was pastor of the church at Conway NH until June 1897. On 6 Oct 1897 he was installed pastor of the church at Walpole NH. He married 2nd) 18 Oct 1899 to Jane Conway Hale, dau of Matthew & Jane E. (Caverly) Hale. She was b. 19 Feb 1873, a descendant of Major Samuel Hale. In 1900 living in Walpole, Cheshire. Co NH with 2nd wife and son John (b. April 1895 in NH).
In 1910 living in Conway NH with his mother and her parents.
Children of Rev. Elisha A. & Lena A. (Henderson) Keep:
1. John Marcus Keep, b. 13 Apr 1895; in 1920 U.S. Census shown as a member and officer of the US Military
and Naval Forces in Baltimore MD; the census states he is single, an Ensign, residing at 900 Chicopee St. Holyoke Mass.

Josiah Nelson Henderson, son of William & Hannah E. (Mitchell) Henderson, was b. 9 March 1879; m. 14 Apr 1900 to Margueritte M. Bushes. Enlisted during WWI. a superintendant at David R. Jones Co in Merrimack NH. In 1942 when he registered for WWII, he was a cabinet maker, living at DW Highway in Merrimack NH. He was the first chief of the Merrimack Fire Department after it was organized in 1924. Mrs. Henderson (Marguerite) was the third librarian of the Merrimack Public Library.
Children of Josiah N. & Marguerite M. (Bushes) Henderson:
1. Ruth Worthington Henderson, b. 6 Apr 1907
2. Lawrence William Henderson, b. 29 Jan 1911, d. 10 Jan 1991; m. 24 Oct 1936 Frances L. Davidson of Plymouth NH; In 1951 chairman of the Field Appeal Tribunal, Dept of Labor of NH. In August 1950 a funeral for their daughter, Heather Henderson of Auburn NH, 8 yrs old, who drowned while fishing was held in the Merrimack Congregational Church, and she was buried in the family plot at Last Rest Cemetery in Merrimack NH. At that time Lawence was working at the New Hampshire Unemployment Security Division of the Labor Bureau.
3. Grace Lorraine Henderson, b. 11 Jan 1916; m. Norman Cameron

Laton Mitchell Henderson, son of Norris E. & Elizabeth M. (Sanborn) Henderson, was b. 26 Oct 1914, Merrimack NH; d. 3 Jan 1990 in New Richmond, WI; SS# issued to him in District of Columbia prior to 1951, and he resided also in Christiansburg VA; he married 21 Aug 1937 to Lillian Mae Hock, dau of Frank Hock. She b. 12 Oct 1914 in Reeds Ferry (Merrimack) NH and d. May 1977. They had four children. According to the Nashua Telegraph (June 9, 1949) he was a former 4-H Club box and a graduate of the College of Agriculture, University of New Hampshire in 1936. Then he spent a year getting a master's degree at Pennsylvania State College where he was Northeastern representative of the American Jersey Cattle Club. His next job was teaching in the dairy department at Rutgers University in New Jersey. Then Mount Ararat Farm in maryland with 300 yead of cattle hired him to build up their creamery and retail milk business. A reserve officer he was called in the service at the start of WWII. He served throughout the war in the Pacific area coming out as major. He then went to work for the Southern Dairy Company and was stationed for three years at Miami FL where he was manager of a large farm which carried from 900-1000 milking cows. In 1949 he was working for the Southern Dairy Company as a manager of a large dairy processing plant at Christiansburg, VA, with 50 men working under him. He wrote many brochures and papers on the quality of milk, and a manual for milk testers in New Jersey.
Children of Laton M. & Lillian M. (Hock) Henderson:
1. Bruce Henderson, b. bef 1948
2. Laton Henderson, b. bef 1948
3. Barbara Henderson, b. bef 1948
4. ? Henderson, b. after 1948

Posted by Jerome Nicholas Vlieland at 14:52