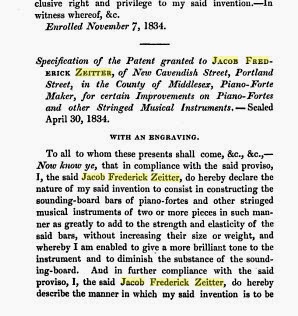 741. SARAH PRICE, alias Pugh, was again indicted for stealing, on the 25th of November, 1 piano-forte, value 40l., the goods of Jacob Frederick Zeitter and others.
MR. LOCK conducted the Prosecution.
CHARLES HARDY . I am one of the firm of Jacob Frederick Zeitter and others. On the 4th of November, 1840, the prisoner came in a very respectable fly to hire a cottage piano-forte, to be sent to No. 41, Curzon-street—the price was 40l.—it was sent to her that day—the agreement was that on the 29th of January she was to let us know whether she would purchase it or not—I wrote a letter, and no answer was returned—I called, and she was gone into the country—we let her have it on hire originally.
EDWARD SMITH . I am a pawnbroker in the employ of Mr. Thomas Smith. On the 25th of November, 1840, I was sent for to go to No. 41, Curzon-street—I went, and saw the prisoner—she shewed me this pianoforte, and wished to borrow money on it—I lent her 20l. at that time, and she had more afterwards—Mr. Hardy has seen the pianoforte, and identified it.
HENRY KIMBER (police-constable V 20.) I have a duplicate which was given me at the station by the searcher.
Prisoner. The officer has a bill for the piano, 40l. Witness. Yes, I have—(read)—"Mrs. Pugh, debtor to Zeitter and Co., to a cottage piano, 40l."
COURT to CHARLES HARDY. Q. Was there an agreement that the prisoner should have the power of purchasing it if she pleased? A. Yes, at the end of January, but I did not see her at the end of January, I never could find her.
ANN WOOLGAR . I searched the prisoner on the 6th of January, and found three or four papers on her, which I gave to the policeman—she said they were small receipts.
GUILTY . Aged 60.
Posted by Jerome Nicholas Vlieland at 22:10