And Henry Priaulx born in 1803 in Southampton .

From Nicholas his second marriage 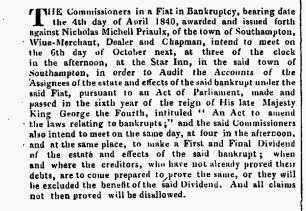 There is a memorial to the Cory family in St Just In Roseland church.


List of Prisoners who are natives of Guernsey or who have a wife and children there, who received a share of the distribution of the £536-18-11 stg. as per the letter from Messrs Mallet & Co. published in our last number:

Posted by Jerome Nicholas Vlieland at 11:43