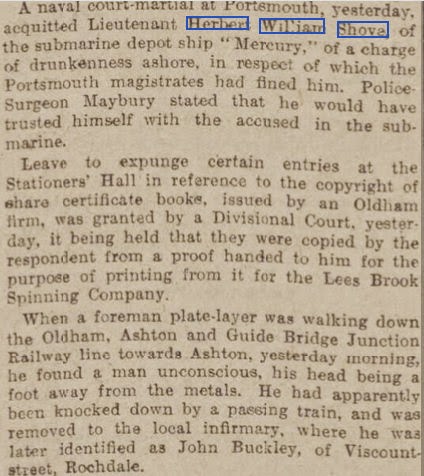 
naval court-martial at Portsmouth, yesterday, acquitted Lieutenant Herbert William Shove, of the submarine depot ship " Mercury,' 0 f a charge drunkenness ashore, in respect which the Portsmouth magistrates had fined him. Police- Surgeon Maybury stated that h e would have trusted himself with the accused in the submarine. Leave expunge certain entries at the Stationers' Hall in reference to the copyright share certificate books, issued by an Oldham firm, was granted by a Divisional Court, yesterday, it being held that they were copied by the respondent from a proof handed him for the purpose of printing from it for the Lees Brook Spinning Company. When a foreman plate-layer was walking down the Oldham, Ashton and Guide Bridge Junction Railway line towards Ashton, yesterday morning, he found a man unconscious, his head being a foot away from the metals. He had apparently been knocked down by a passing train, and was removed to the local infirmary, where he wa3 later identified as John Buckley, of Viscountstreet, Rochdale.
Posted by Jerome Nicholas Vlieland at 11:30