Bertha Susannah White (spinster), second daughter of Samuel and Catharine , is left number one Ryde Street.
Although the houses are no longer there, pictures of the street in the 1940’s show Ryde Street as a terrace of six houses numbered one to six and from the front at street level they simply looked like a terrace of brick/white painted tiled roof cottages (much like many normal early Victorian ones) BUT from the back and high up it was obvious that five and six were later additions with a separate pitched roof and nos 5-6 were not even rendered at the back. (The properties were still occupied when the council took the pictures).
It seems clear that Samuel Ethelbert owned the whole original terrace (1-4).
Younger sister Bertha Susanna White marries on the 7th of June 1888.
Her husband Edward Brice Presland is a company secretary.
The witnesses are her Mother Catherine Veri and Adolphus Charles White a Professor of Music living in Park Road Hampstead.
He was born in Canterbury and is then 57.
He is a widower, his wife Eliza A White an artist painter born in Chelsea is deceased.
He is not the only Mr White, a professor of music in the lives of the White siblings.
Bertha, however, is not to inherit for almost thirty years.
At the time of the 1901 census Edward Bertha and their daughter Helen Bertha age 21 are living in Putney (an area they have been in since the birth of their daughter).
Helen Bertha marries Leslie Miller in 1914. 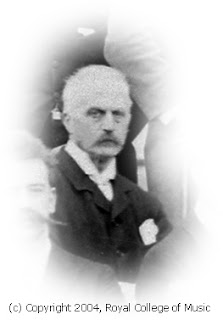 Adolphus Charles White (1830–1902)
Professor of Double-bass, 1884–1902
A member of staff almost hidden from view, but he had been principal double bass of the Philharmonic Society, and taught at both the RCM and the Royal Academy of Music. In addition he strengthened the College orchestra at rehearsals and at public concerts.
Posted by Jerome Nicholas Vlieland at 10:27