Twins Charles Ethelbert and Elisabeth Mary Mills Annie (Bessy) were baptised together at All Saints Southampton on 5th January 1859. The church, like much of Southampton, was destroyed in 1940. Indeed, bombing raids by the Luftwaffe on two successive nights in 1940 severely damaged much of the ancient centre of the city; including nearly all the churches.

The family had moved before the birth of Bertha Susanna in 1860 and are now at 22 Sussex Street, Winchester.  Samuel Ethelbert is an Excise Officer.  Sussex Street is right in the centre, close to the railway station, which had been built as Winchester City station in 1839/40 by the London and Southampton Railway Company, then serving the only major settlement between London and Southampton.  In 2006, Channel 4’s Homes programme voted Winchester the best place in the country to live.

The will and the probate register for Samuel Ethelbert White’s death in 1886 both show Charles Ethelbert as sole executor but note that Catherine Fritz White (widow) now living at 32 St Maur Road Fulham is declared the lawful attorney when probate is granted on 19th August (since Charles is shown as ‘residing in Bombay’).  (Another Vlieland cousin, Lawrence Ethelbert Candler is also there).

In the Will he leaves 4 children, each, a house in “Ryde Street in the Parish of Saint Dunstans in the City and Borough of Canterbury”. At the time the properties were built this terrace of 4 brick/white painted, tiled roof cottages comprised all of Ryde Street - though numbers 5 and 6 were added later and we know from the surveyors orders for water to be laid on, in May 1876, that these four were almost the last properties in Canterbury to gain access to water..

In addition his eldest son Charles Ethelbert is left his Fathers old residence at 6 Blackfriars (currently tenanted by William Jennings Esquire) together with his main address at 36 Chesilton Road, Munster Place Fulham.

Charles Ethelbert also joined the Navy in 1874; apprenticed with P&O.
He gains his Masters Certificate in January 1879 at his first attempt and the London Gazette shows the Admiralty Notice confirming that he is appointed sub lieutenant from 31 Dec 1889. 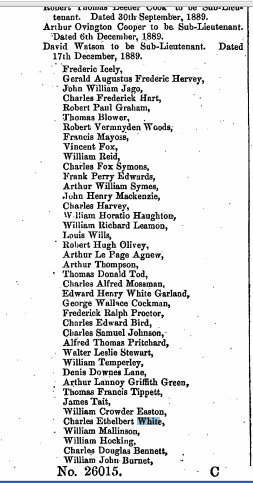 He gains promotion again fairly promptly and stays with P&O Line as a First Officer.
‘P&O’, one of the largest shipping companies in the world, started life as a shipping agency business shortly after the Napoleonic War.
Though mainly the foremost mail carrier it also became a major commercial shipping line and passenger liner operator.
In 1886, when father dies, he is living in Bombay; a jewel in Britain’s crown since Portugal gave it to Charles II as part of his wife’s dowry.
Charles continued his career on the SS Assam, a steamer built in 1873 by Caird & Co, Greenock.
She was 3,033 gross tons with a length of 350ft x beam 39.3ft, one funnel, three masts, iron construction, single screw and a speed of 12 knots.  There was accommodation for 80-1st and 36-2nd class passengers.  She had been bought by P&O in 1875 for her Indian routes.  With English officers, the crews, they suggest, were generally made up of Indians in the engine-room, Lascars on deck and stewards from the Portuguese colony of Goa.  It notes that “The captains for the vessels were only responsible to God and the Board of Directors, and complaints were not welcomed”.

According to the extensive Merchant Navy Association history ‘red duster’ the passenger lists at the time would be made up of civil servants bound for India, diplomats, soldiers, bankers, industrialists, missionaries and young ladies who were affectionately referred to as the 'fishing fleet'; (looking for husbands who, if they failed to get a catch were then known as the 'returned empties').  Travelling on board a (comfortable) P&O steamship was an extension of living in the British 'Raj' for the sahibs and memsahibs.  On July 5-6 1891 Mahatma Gandhi returned to India and reached Bombay from Aden on S.S. Assam to receive the news of his Mothers death.  His biography notes that “the sea was rough in Bombay harbour, not an unusual thing in the Arabian Sea in June and July.  It had been choppy all the way from Aden.  Almost every passenger was sick”.

Charles dies less than a year later at sea.
The Assam had still been shuttling between Aden and Bombay.
SS Assam was at sea bound for Aden when Charles died.  It was rough again.
Lloyds telegrams reports that it had previously arrived in Bombay on 26th April and then that it subsequently arrived in Aden on 6th May.  Portsmouth Evening News of the 18th May reports “Charles Ethelbert White, R.N.R., First Officer P. and O s.s. Assam ... (was) ... washed overboard in the Indian Ocean”.  He was 33.

The probate records show that Charles Ethelbert White late chief Officer of the Peninsular and Orient Company’s Steamship “Assam” died 1 May 1892 at sea.
Administration London 19 August to Catherine Veri White widow Effects £178 18s 4d.
So his Mother Catherine Veri White (nee Vlieland) was his sole executrix not long after she had to deal with her late husband’s affairs.


Posted by Jerome Nicholas Vlieland at 11:32